Posted on January 5, 2020 by adriangstewart 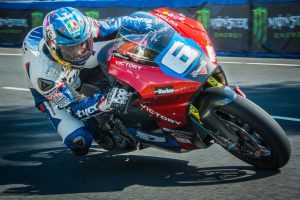 Since the late 1800’s the engineers who designed and built self-powered vehicles have always sought to measure themselves against their competitors by racing against each other. Whether it was cars, motorcycles, boats, or planes, they wanted to race.

Most of these early races were to demonstrate durability and endurance, some of those early races live on to this day. The most famous – and longest-running – endurance race of them all, the 24 Hours of Le Mans, first took place in 1923.

However, the commercialization of motorsport in the mid and late twentieth century also brought a need for entertainment to motor racing. The races became more prominent, the drivers became famous, and this attracted new sponsors from outside the industry. Initially, tobacco companies became involved, but today the sponsors are more diverse, with companies like Red Bull being active in multiple forms of motorsport. As well as new sponsors, new endurance events flourished, events such as the off-road Dakar Rally.

As we start 2020, the original lure of motor racing remains as strong and perhaps stronger than ever, and the challenge of measuring yourself – against competition and, more importantly, against your boundaries holds the same fascination that it ever did. Racing has always been driven by the need to go beyond expectations, to motivate teams, and to excite supporters.

Many times, you will hear about the technical developments that trickled down from the racetrack to the road car. Rearview mirrors, direct-shift gearboxes, disc brakes, active suspension, four-wheel drive, multi-function steering wheels, and the monocoque chassis – the list continues to grow.

Racing serves as the incubator for technology and a way to rapidly test innovations — materials, design, and testing all developed for maximum performance during the competition in endurance racing. Audi, BMW, Honda, Jaguar, Mercedes, Nissan, Porsche, Toyota, and others use racing to develop technologies that ultimately benefit all road users.

But these hard advancements in technology are the result of multi-million-dollar budgets and belong to the big names in racing. If that’s the case, why do so many companies race with the same determination and passion but on a smaller scale?

I believe it is because the soft benefits of racing can be just as significant as the hard-technological developments.

Racing creates a unique environment. An immovable date – the race will take place on a specific day at a particular time, at a certain place, whether your team is there or not. It’s not a deadline that can be slipped or postponed. Head to head competition – you are pitting yourself directly against other teams, some will win some will lose. Your race opponents are frequently your commercial competitors. Winning or losing will affect who wants to buy your products and even who wants to work for you. Public Audience – you are putting your technology, your team, and your reputation on the line in a public forum win or lose everyone will witness the outcome. You can’t use PR spin to reframe the race outcome in some favorable way, you were either on the podium, or you weren’t. Commitment – being on the podium is exciting, winning is fantastic, consistently winning races and claiming the championship is the result of season-long commitment.

From 2009 to 2017, I was the Marketing Director at Brammo Inc. We designed and built electric vehicles by developing our proprietary battery and motor technology. We raced – sometimes we won, and sometimes we came close. 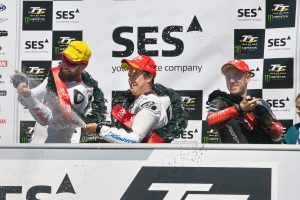 The impact of the racing team on the whole company (about 100 people) was profound. Our commercial goals were top priority, which meant the race program had to be worked on after hours, and the races were always at the weekend, so other than the professional riders, no one on the team was paid beyond their regular salary and expenses. 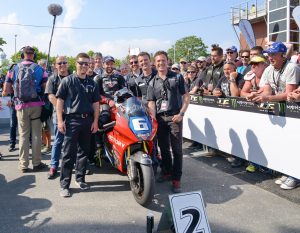 The camaraderie that developed among race team members was enduring. In that regard, the race program was one of the most effective team-building exercises I have ever participated in. The mutual respect that developed at the racetrack transferred into the work environment. Pride in the race team went beyond the race team members. Race winning bikes were displayed in reception together with cups and trophies. Physical evidence that everyone saw every day, and that reminded us all of what comes from extraordinary efforts.

For me, the hard and soft benefits derived from racing are invaluable. However, going forward, we need to retain the innovation and teamwork while making racing sustainable. The Isle of Man TT Zero was ahead of its time. Can the ABB FIA Formula E and FIM.