Video Killed the Radio Star (and maybe one day the TV Star).

When the  Buggles sang that Video Killed the Radio Star….what better choice could there have been for the first ever music video to appear on MTV.

However, that number is down from the 155 hours per month in Q4 2013. As you might expect watching video on the web is up three more hours each month compared to 12 months earlier.

Much of that content is high quality original web internet content created courtesy of big budgets shows such as Orange is the New Black and House of Cards. 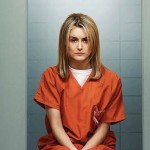 “Orange is the New Black” starring Taylor Schilling on Netflix.

Meanwhile there is no accepted way of measuring this viewer leakage – so while people may be watching on mobile devices, advertisers are not prepared to pay for something that cant be quantified.