Well after my post yesterday on the underwhelming contribution of Tesla cars to the issue of climate change I didn’t imagine that I would be writing about Tesla again today. But I am….

Back in 2008 ‘Top Gear’ broadcast a race between the petrol-powered Lotus Elise S and the electric Tesla Roadster. During the test Jeremy Clarkson said the Tesla ran out of power after 55 miles, compared to the 211 miles claimed by the Tesla. 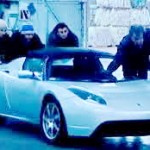 Now anybody who watches Top Gear knows two things; the presenters do not like electric vehicles in general often reffering to them as “milk floats” – (some UK cities have used lumbering electric powered  vehicles to deliver the daily pint of milk). And secondly  not everything Top Gear say or do is strictly true and exaggeration is their stock in trade. 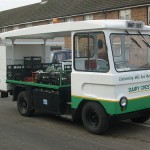 At the time Tesla complained to the BBC but then let matters rest – until yesteday when they filed a writ in the High Court London against the BBC claiming;

Top Gear had intentionally and/or recklessly, grossly misled potential purchasers of the Roadsters… Its reputation has been severely damaged………

Quite what Tesla is seeking is unclear but I think their legal action is a blunder – the facts are that anyone thinking of buying a Tesla takes the Top gear story with a pinch of salt. Not being able to take this type of joke from a programme that majors on entertainment rather than information will make Tesla look weak in the eyes of potential purchasers.

It will be interesting to see how this one plays out….once again Jeremy and his colleagues at Top Gear can bask in the free publicity and controversy they enjoy so much…….

Its a battle you cannot win Tesla……..now lets see how many more thousands watch the Top Gear video of that infamous “race”……